I put the alarm clock on the table where I sat looking out of the open window. The turkey was out there, it was ten past two and I listened hard for the clip-clop of Grandad's mules on the hard packed dirt road. The two events were perfectly timed. At least that’s how it was in my head.

The clippity-clopping sounds of the mules coming up the road soon reached my ears and I looked outside for the turkey. He was there about 50 feet from the house. I slid off the chair and peeked quickly down the lane. I could see Grandad coming and judged just about when he would get there. 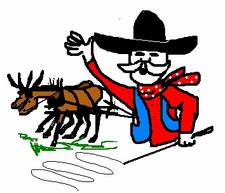 I ran around the corner of the house so fast that the stupid turkey was startled and ran from me for the first time in his miserable life. He fluttered and half flew another 50 feet farther away. I waved my arms and the turkey just stood there. Grandad was approaching, the turkey wouldn't come, and my heart sank into my shoes.

"Whoa." I heard Grandad say as I walked around the corner of the house. I waved to him as I started toward the wagon. All of a sudden that turkey hit me right in the middle of my back knocking me flat. Then he began to whip me with his wings, he pinched me with his beak and I screamed and that old turkey and I rolled over and over in the dirt. He had me down and was standing on my back as his wings whipped the back of my head. Suddenly there was a quick hissing sound as something flew through the air and then a loud snap, then nothing. I slowly peaked out from under my arms.

The turkey flapped its wings and thrashed around in a circle there on the ground but he had no head. I felt Grandad's strong hands pick me up. He looked hard at my face and my eyes then brushed me off and smiled although his face was still mad. At his feet lay the long whip called the blacksnake and the turkey's wrinkled red head was beside of it as neatly cut off his neck as though that whip were a sword.

Ma came out on the porch is a rush. "What's the matter?" she yelled, "what happened, who killed my turkey?"

"I did, gol-durn it! "Grandad yelled back. "This here child was near be'n eaten alive by that no account critter. Shouldn't have one like that on the place, come near taken his eyes out."

Ma rushed to me to see if I was ok, and I was. In fact I was smiling ever so sweetly. Thanksgiving came early in June that year and it was delicious.

This page has been accessed 60 times