When I was just a kid of about eight or so, turkey guard used to be my job. My ma used to hand me the long switch that stood by the back door and send me out to stand watch over the garden. I'd stand there switch in hand guarding against the half wild turkeys that lived up on the hill above our ranch house.

Pa fed them once in a while to keep them close, so we could have one now and then for dinner. Whenever Ma cut open their gizzard she would find small gold nuggets in them. The turkeys picked up the shiny pieces of gold along with the tiny pieces of quartz as they worked along pecking their way up and down the gullies around the place. She wound up with an old Bull Durham sack plumb full after a time. The turkeys used to come and get in ma's garden though, and make an awful mess. That's where my job came in.

I'd stand out there in the shade of the big sugar pine and wait. If any decided to fly over the fence into the garden I'd rush out yelling my head off, waving my arms or flapping a big white rag. If that didn't scare them, I'd make a fast run at them and switch them until they beat a quick retreat back over the high wire garden fence. 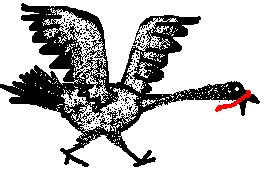 Sooner or later we would see them sailing down the hill like big bats and settling in the pasture pretending ma's spring garden was the last thing on their minds. They'd peck along nonchalantly then with a sudden flurry of those black wings over they'd go and young vegetables would begin to disappear in a wink. 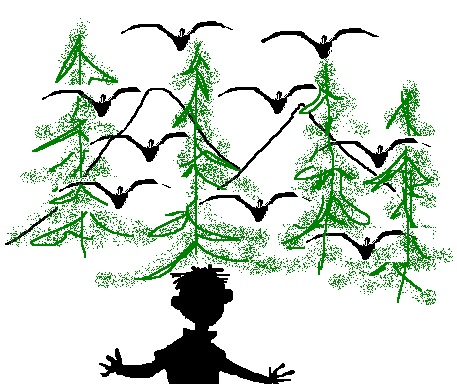 There was one young turkey gobbler who hadn't learned to fly over that fence yet, and he was braver and bigger than the others his age and downright ornery. He'd come with the other young ones fluttering, hopping, sort of sailing and sliding down the hill as the big ones flew high over his head.

I had my eye on him the whole time and he had his eye on me. He'd peck around like any other turkey but somehow he seemed smarter than they were. I'd run the others away and he was always the last to go. He'd sorta hang back and I'd take a run at him and then he'd take a halfhearted run at me, sometime's we'd run at the same time and that was a pure fright.

I'd take to hard switching him once in a while to make him go. He'd run a couple of steps and then stop and glare at me. His feathers would rise up and he'd appear twice his normal size. I'd wave my switch over my head and rise up on my toes and he'd beat a retreat. We did this all summer but at the end he was able to fly and it took some heavy clods of dirt to rout him from ma's squash and tomato's. I couldn't get any bigger.

Fall turned to winter and then spring again. The fields were plowed and I over heard conversations concerning the garden and it's coming bounty. My mind went to my job and that turkey. Pa killed a squirrel one day and cut it up on the old stump and then called them.

"Turk! Turk! Turk! "Pa called loudly, "come Turk." The whole flock flew in and settled in the barnyard as he chopped up the squirrel for them. I stood there looking over the flock of about 25 or so, and then I saw him for the first time in a long while. He stood a little ways apart from the others, big, and shiny black. His head was red and rumpled as it could be for a gobbler. It even had blue on it.

A long red rumpled worm like thing hung down the side of his beak and joined bright red rumpled wattles on his wrinkled neck. His sleek black and white feathers tinted with bronze highlights glistened as he turned from side to side in the morning sun. His wing feathers scraped the ground in a vibrating buzz as he strutted about. His tail fanned out wide framing his great breast and rumpled head and his evil yellow eye, which seemed to be always fastened on me. A long beard of stiff hairs hung from his breast like a banner.

Pa tossed out bits and pieces of the squirrel meat for them and before I knew what was happening that turkey sort of leaped up and had me by the front of my pants and was pulling me. I kicked at it and it jumped away and then back again to take a better grip. This time he had some of me in the grip. I yelled and hit him and he let go and jumped back. Pa had a good laugh as I threw some dirt at that ol' turkey and backed him away then I stood closer to Pa.

"Looks like he doesn't like you." Pa said.
"Well, I don't like him much either."
"Stay away from him is the best thing for you to do. He probably just wanted you to know who the boss was."
I made a raspberry sound as loud as I could.
Pa said, "here, here now, none of that."

Go to the next page